On Sunday 17th November, Ruperra Castle Preservation Trust will hold its 11th A G M and Lunch at the Waterloo Hotel in Newport. As soon as you decide to come along, send in for the Menu and other details, explained on the poster. 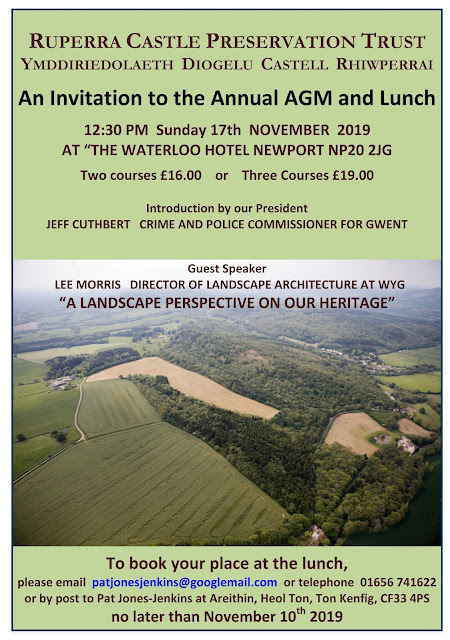 Posted by Pat Jones-jenkins at 17:28 No comments:

Help to stop the Rot!

STOP THE ROT!
Ruperra Castle Preservation Trust fears that Caerphilly’s forgotten Castle – at Ruperra – is at risk and that Ruperra, an exceptional pageant castle unique in Wales and built by Welshman Sir Thomas Morgan – ancestor of the Lords Tredegar – will remain hidden, undervalued and ruinous.
The current owners – Mr and Mrs Al Khafaji – have put in planning applications for the first part of a residential development with no proposals for the Castle and no prospect of producing enough surplus money to restore the Castle which they have left to rot.   The Trust thinks these applications should be REFUSED.
NO REPAIR OR RESTORATION WORK HAS BEEN UNDERTAKEN ON THE CASTLE since 1941 apart from emergency work to demolish internal chimneys - despite Scheduled Ancient Monument and Listed Building legislation.  During this time the south-east tower has collapsed and large cracks have appeared in its largely unsupported walls and north-west tower.
The Ecological Impact Assessment report shows the extent and importance of protected species on the site including a colony of Greater Horseshoe bats.  The applications will affect the Stables, Bothy and Generator block which houses a 204 Greater Horseshoe Bat maternity roost - one of only 5 in Wales.
The Council’s own LAND MAP and the EU-funded Sustainable Caerphilly Landscape Master plan (developed with external expertise and inputs from a wide range of voluntary groups, including the Trust) shows the need for a sustainable future for this historic area.
The Trust considers that Caerphilly Council should refuse these applications because they WILL NOT protect the Castle for local young people as required under the Well-being of Future Generations Act (WFGA).
Pat Jones Jenkins, Secretary of the Trust said “The Castle and its Estate are an unique and precious part of the heritage of Wales much valued by local people who are appalled at the level of neglect and lack of public access.  Like Caerphilly Castle and Tredegar House, Ruperra Castle and Estate is a vital link to families who made a huge impact on the history of Wales, its industries and its people over many centuries.
The Ruperra Castle Preservation Trust has been pivotal in recording and making available to local communities many of its stories from the distant and more recent past.  There are more which are yet to be investigated and re-told. Allowing it to become a private gated community is not the way forward! “
Please send your objections by Monday 28th October to planadmin@caerphillygov.uk