Through his diary entries, William Beechey, (farmer on  the Ruperra Estate) continues to describe aspects of his life on the estate during the spring of 1899.

14th April - ' Heard the cuckoo today.' (Like all country people, then and now, he thought hearing the cuckoo was important.)

4th May- 'Caught 19 lame ewes. Found a pheasant's nest. Finished tailing all the lambs. I hear that Tredegar ewes and lambs are looking very bad. They say the ewes are rotten.' ( This seems to indicate some rivalry!)

How good it was for the cuckoo to tell William Beechey that Spring would be coming!.

Today in Ruperra, we’d be lucky to hear the cuckoo at all.

Until about the 1960s, we might have heard them arriving every Spring from South Africa, a continuous flight of 50 hours. Going home for the winter in August, 95% of Welsh and Scottish cuckoos will fly safely through Italy. There has still been a decline of 60% however. This one is fat on berries and ready to leave. 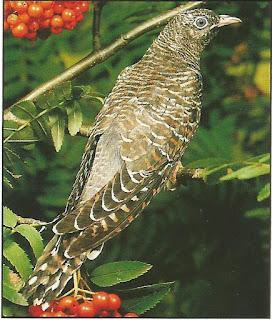 Cuckoos are now classified as "endangered" like many other birds. This could be due to the lack of insects, in particular their favorites, the hairy caterpillars, as well as to the loss of our natural world, through modern agriculture and the way we manage our countryside, not to mention climate change.

Today in Wales, we can hear their lovely call in Spring in areas like the Brecon Beacons and central Wales near Tregaron.

What about the sheep? -  William Beechey's flock was his pride and joy .He took great care of his sheep. 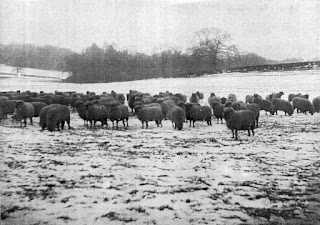 Miss Millar, a visitor staying in the castle, must have had a very expensive camera to take such a good quality photo in 1898! The sheep look good. Let's hope William saw the photo!

Posted by Pat Jones-jenkins at 16:11 No comments:

William Beechey’s diary, written between 1899 and 1920, give us a wonderful insight into what it was like to work on the Ruperra Estate.

At first he lived with his family in a cottage called Llanfedw( see picture below) Is this the only medieval ‘hall house’ left standing in Caerphilly now, known as New Mansion? Then they moved to Ruperra Home Farm where, in charge of the crops and the animals, he provided the food for the Castle. He still found time to write in his diary every night. There was no TV in those days! 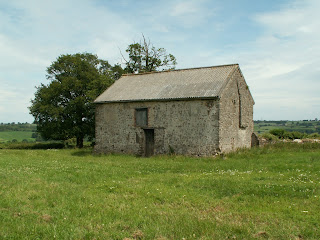 'Put 6 hens to sit in box. Rosa got shingles. Doctor been to see mother. Ivor bad in bed. Finished digging the garden. Mr. and Mrs. F Morgan came to the castle.' (Colonel Freddie's son Frederick and his wife Dorothy) 'They are not coming to Machen House. Jim Spring sowing oats the left side of New Georgy.' ( A field at Home Farm). 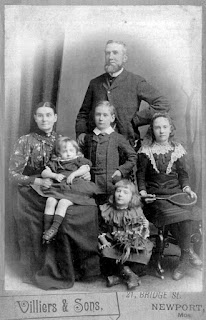 The names of the children were Rowland, at the back, Harry, on his mother’s lap, Gladys, on the right and Rosa in the front.
Posted by Pat Jones-jenkins at 21:43 No comments:

Week ending January 8th 2021 Are these memories gone for ever?

In 1901 the Ruperra Estate was in its heyday and the census returns for that year for the areas around Ruperra show many agricultural occupations. People from all the villages around would have worked on the estate. Much of the day-to-day work would have been shared out amongst employees who could turn their hand to most things.

The grounds, gardens and woodland had to be kept in good condition, herds and flocks had to be tended and food had to be produced for the family at the castle, their visitors and those who looked after them.

Specially qualified staff in charge of the grounds, the gardens, the horses, the game rearing and domestic work would come from all other parts of the UK. They were both sought after and seekers themselves and the estate was a very good place to be employed. Only the best were employed at this stately home. 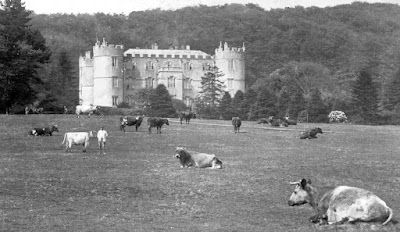 Posted by Pat Jones-jenkins at 12:42 No comments: