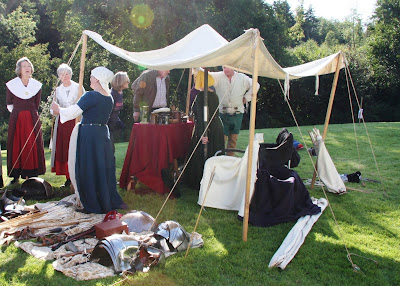 Over 100 people showed their great affection for Ruperra when they flocked to the Barn at Ruperra Home Farm on Sunday September 6th.

The event started with a walk on the footpaths surrounding Ruperra Castle, guided by the conservationist architect John Thorneycroft once responsible for preserving royal palaces and castles at English Heritage.

Ruperra is famous as a ‘Pageant Castle’.  It is one of only four 17th century pageant castles left in Britain, and the only one in Wales. It came about like this. Thomas Morgan of Machen was a steward – a very highly paid position - to the Earls of Pembroke, the Herberts of Raglan Castle. Henry VIII had given them Wilton House, near Salisbury, and many famous Welsh and English people would have visited them there, where they used to hold pageants with people pretending to be medieval knights and actors. In this capacity Thomas Morgan would have encountered James I and Charles I, and it was at Wilton that he was knighted by James I.

Many ambitious Welsh people who visited Wilton House stayed in England and built their mansions there. Thomas Morgan, now rich and a knight came home to Wales and built Ruperra Castle in 1626 in the style of the wooden scenery made for the medieval pageants at Wilton.

We thought it would be great fun to hold a pageant of our own just like Sir Thomas Morgan would have done. We invited the Bowmen of the Rose to display medieval warfare, the Bedwas Musical Youth theatre to perform a tournament, and the Dawnswyr Penybont, to show Sir Thomas as a patron of Welsh folk dancing and harp playing.  A resident of Gwynllwg read a medieval poem in Welsh and, accompanied by two Friends of the Newport Ship and one of the Bridgend dancers, gave an impromptu performance of a real 17th century masque play, which raised a great cheer. 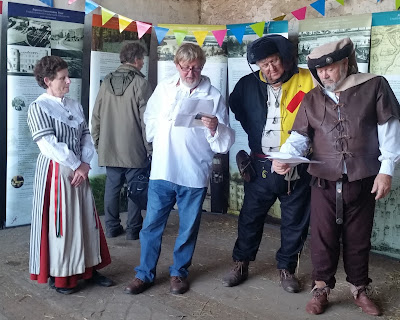 An exhibition in a medieval style tent explained it all and we sat on the hay bales, kindly placed in the barn by the farmer to eat our tea and cakes. Mrs Barbara Jones, deputy leader of Caerphilly County Borough Council said that she was delighted to be asked to attend. She hadn’t known what to expect, and really enjoyed seeing all the medieval costumes. Her interest in Ruperra was sparked even more by seeing pictures of the people she used to know as a child on the exhibition panels in the barn.

This was a really good community event and one that Wales can be proud of.
Posted by Pat Jones-jenkins at 17:28 No comments: